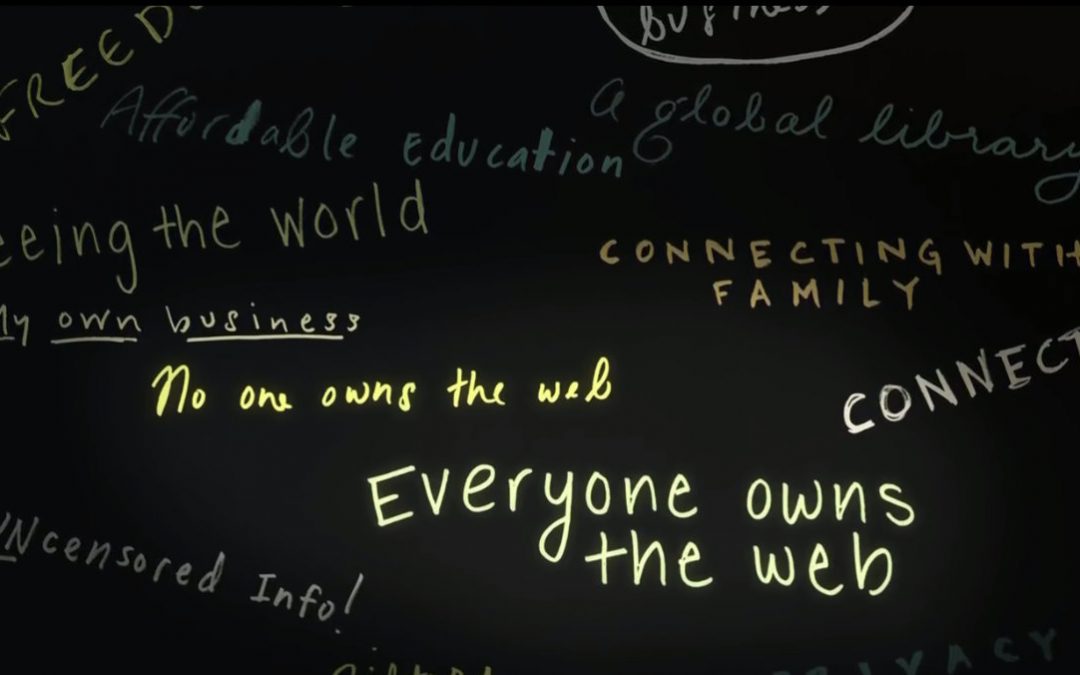 In this blog post I am looking back to the beginning of the World Wide Web for make you better understand the peril situation the Web is nowadays.
The World Wide Web was “born” as an open web. It was a decentralised platform allowing peope to access and share information all around the world. This web consisted of a few thousand web sites stored on web servers. It was a global collection of documents (web pages), linked by hyperlinks, accessible via the domain name system and a software called browser or navigator. Everyone was able to participate in building this network. Google didn’t exist and Steve Jobs had not returned to Apple. Year by year this open world wide web became bigger and bigger.

Over the years the open web became interesting for companies and some of them started to do business on line. In 2011 we already spoke about GAFA, Big Four or Big Tech. The terms referred to the companies Google (Alphabet), Amazon, Facebook and Apple. They started to transform the open web to a closed web or to say it more poetic, a walled garden. A walled garden in tech means a closed platform or closed ecosystem where the carrier or service provider has control over applications, content, and media, and restricts convenient access to non-approved applications or content. This is in contrast to an open platform, where consumers generally have unrestricted access to applications and content.

Even this development is in contrast to the open web, walled gardens doesn’t have to be bad or evil. I mean, I’m writing this blog post using a MacBook. While writing I see emails from my gmail account in my notification window. This blog post will be shared on our Facebook page and of course do I buy stuff on Amazon. So I’m very happy with Big Tech, they made my life easier and connected me with so many people. The problems with Big Tech are starting when it comes to control and privacy.

Big Tech, often together with governments controls what the world considers as news and who can access it. Even if it would be not intentionally, they are in control of everything we are reading on their devices and platforms, simply because they are running the walled garden. While reading, watching and listening, we create data and leave traces. To continue to read, watch and listen, we give them more data. Big Tech uses the data to offer us better experiences, they say. They know more about us than anyone else. More than your parents, your family, your partner and of course far more than your government. The longer Big tech exists, the more data they will collect. By analysing this data they are able to offer more and better services. This is the simple reason, why they are so successful.

You probably made your own experiences since the beginning of the World Wide Web. But even if you know it, have a look …

Solid is a web decentralization project led by Tim Berners-Lee.
The projects “aims to radically change the way Web applications work today, resulting in true data ownership as well as improved privacy” by developing a platform for linked data applications that are completely decentralized and fully under users’ control rather than controlled by other entities.

If you look for an example of a successful decentralised project think of email. You can have an email address at Yahoo, or Google, or on your own server. You can write an email from an email account of your choice and you can send it via several other email servers to any other email address worldwide. And the cool things is … it works. An email message sent in the early 1970s looks very similar to a basic email sent today.

Berners-Lee became increasingly dismayed when the Facebook–Cambridge Analytica data scandal became public, when Facebook in 2012 conducted psychological experiments on nearly 700,000 users in secret, and when Google and Amazon applied for patents on devices that listen for emotional changes in human voices (“I was devasteted”: Tim Berners-Lee, The nab who created the World Wide Web, has some regrets).

Two weeks ago he wrote a blog post to announce Inrupt (One Small Step for the Web…).

I’ve always believed the web is for everyone. That’s why I and others fight fiercely to protect it. The changes we’ve managed to bring have created a better and more connected world. But for all the good we’ve achieved, the web has evolved into an engine of inequity and division; swayed by powerful forces who use it for their own agendas.
Today, I believe we’ve reached a critical tipping point, and that powerful change for the better is possible — and necessary.

His new web decentralisation project called Solid reminds me a bit of the structure of the open web. The open web works with the easy to learn markup language HTML. It is possible to write web pages with HTML that are stored on a web server. These pages are interconnected through links and displayed by a browser. The important bit is that everyone is able to read AND write web pages. What is missing in the “old” open web are access rights to personal data.

The Solid platform extends the open web with personal data. A solid server, which can be hosted by yourself or another entity, contains your personal data. The solid platform provides tools to control the access of others to your own data. The data itself is organised in cards (see screenshots). 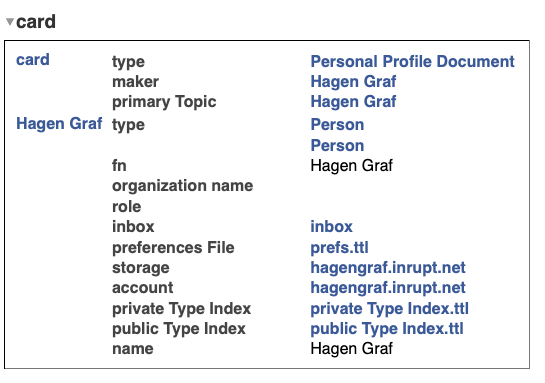 It’s still the early days for Solid as you can see clearly when you look at my personal profile document.
But Tim Berners-Lee is not alone in his attempt.

A lot of people and projects are trying to decentralise the Web. Just a few examples:

Tim Berners-Lee is not the inventor, nor the leader, the decentralised Web shouldn’t have one.

The goal of the decentralised open web is giving individuals control over their own data. We all need an open web for sharing and getting information, for affordable education, for having fun, connecting with each other and for doing business!